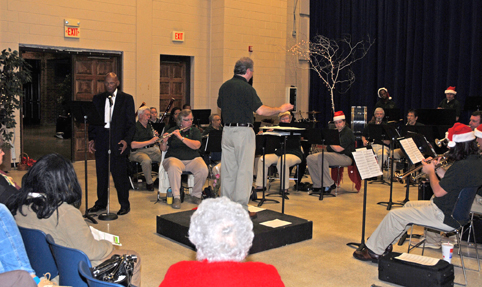 The Vance-Granville Community Band presented its fourth annual Holiday Concert on Monday, Dec. 12 in the Civic Center on the college’s main campus in Vance County. VGCC music instructor Michael Stephenson serves as director of the band.

The program featured familiar holiday tunes, including several medleys of Christmas carols and the Leroy Anderson classic, “Sleigh Ride.” On “The Ultimate Christmas Medley,” the band was accompanied by veteran vocalist Raynah Adams. A Henderson native, Adams was a member of the U.S. Air Force “Singing Sergeants” and has performed in many prestigious venues, including Carnegie Hall and The Kennedy Center. A piece called “Haunted Carnival” by Rob Grice was re-worked for the occasion as “Santa’s Haunted Workshop.” Another work, Glenn Osser’s “Holiday for Winds,” is not particularly seasonal, but Stephenson noted that with its title, it can be played for any “holiday.”

The concert also featured performances by the “Vanguard Combo,” which consisted of VGCC students who have received the college’s Music Performance Scholarships for 2011-2012 — Joseph Hedgepeth (tenor saxophone) of Henderson; Chris Bost (guitar) and Norris Foster (drums), both of Oxford; and Sean Casady (bass) of Louisburg — plus Vance County Early College High School student Eriekca Crosby on vocals. Stephenson accompanied the ensemble on keyboard and on alto saxophone. The Vanguard Combo’s set included classics and contemporary favorites such as “White Christmas,” “Jingle Bell Rock” and “All I Want for Christmas is You.” After the Vanguard Combo performed, students passed out candy canes to children in the audience.

Formed in 2008, the Vance-Granville Community Band is a joint effort between interested citizens and students. The ensemble has grown to approximately 50 members, including people of all ages from all four counties of the VGCC service area (Vance, Granville, Warren and Franklin) and beyond. For more information, call Michael Stephenson at (252) 738-3346.

Above: Raynah Adams of Henderson (left) sings with the Vance-Granville Community Band (under the direction of Michael Stephenson) during the holiday concert on Dec. 12, 2011. Many band members wore red Santa hats to complement their distinctive green Community Band shirts. (VGCC photo)