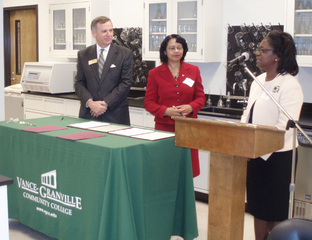 Leaders from North Carolina Central University (NCCU) and Vance-Granville Community College met Thursday to sign new articulation agreements and to discuss how to boost enrollment of African American males in higher education, especially in VGCC’s programs.VGCC President Randy Parker and Dr. Beverly Washington Jones, NCCU’s provost and vice chancellor for Academic Affairs, signed two agreements in the community college’s new Biotechnology lab, on its Main Campus, located on Interstate 85 between Henderson and Oxford.The articulation agreements allow students to more quickly and conveniently finish degrees through VGCC and NCCU that prepare them for careers in nursing and in the biotechnology field. One relates specifically to NCCU’s Biomanufacturing Research Institute and Technology Enterprise (BRITE) Center of Excellence and the other relates to students entering NCCU’s nursing program. VGCC students can enroll in either the college transfer program or in the college’s nursing program as they prepare to transfer to NCCU.“These agreements are all about giving our students the most opportunities for success,” said President Parker. “Working together, VGCC and NCCU are adapting to meet the needs of the twenty-first century workforce in our area.” Parker said that he and NCCU Chancellor James Ammons have discussed the need for the two institutions to meet and work together more frequently, considering their geographic proximity.“We are serious about strengthening the partnership that we have with Vance-Granville Community College,” said Provost Jones. “We believe that our efforts will be mutually beneficial. We also believe that Vance-Granville can be fertile ground for our recruitment effort.”NCCU brought a team of 11 to the community college. In addition to the provost, NCCU was represented by its Vice-Chancellor for Student Affairs, Roland Gaines; Li-An Yeh, director of the Biomanufacturing Research Institute and Technology Enterprise (BRITE); Linda Love, director of the Office of University and Community College Partnerships; Dr. Lorna Harris, chair of the Department of Nursing and others. Vance-Granville officials taking part in the meetings included Marsha Nelson, Vice President of Instruction, Gene Purvis, Vice President of Student Affairs, Dr. John Beck, Dean of Arts and Sciences, Dr. Angela Ballentine, Dean of Health Sciences, and Leo Kelly, Dean of Adult Basic Education, among others. Vivian Reed, President of the North Piedmont Chapter of the NCCU Alumni Association, was also on hand.With the signing of the two agreements, NCCU will have four articulation agreements with Vance-Granville, concerning nursing, BRITE, early childhood and education.The signing ceremony concluded as the NCCU provost welcomed VGCC officials as honorary “eagles” (the NCCU mascot) by receiving official eagle pins and performing the eagle hand salute.At a meeting following the signing ceremony, VGCC and NCCU officials discussed the potential for other partnerships between their institutions. NCCU officials made presentations regarding the university’s Black Male Initiative and its BRITE program. The African American Male Leadership Academy is an academic enrichment program designed to improve the educational outcomes of minority male youth in grades 9-12 who are at risk of academic failure. The program is designed to develop communication, cognitive, and problem-solving skills that are needed to counter social and educational risk factors and enhance personal assets that will increase their chances for success in high school, college, and the workforce. President Parker stated that it is VGCC’s goal to partner with NCCU to support young African American males from the community college’s service area in the Leadership Academy.Participants also heard about the university’s Biomanufacturing Research Institute and Technology Enterprise (BRITE) Center from the center’s director, Dr. Li-An Yeh. The BRITE Center is part of the statewide initiative to make North Carolina a premier provider of skilled workers for the biotechnology industry. NCCU was one of only three institutions selected by the State of North Carolina to help build a new workforce in biotechnology through the Biomanufacturing and Pharmaceutical Training Consortium. Initial funding for the project ($19.1 million) was provided by the Golden LEAF Foundation and the biotechnology industry. NCCU plans to offer new bachelor’s, master’s and Ph.D. degrees in biopharmaceutical science. The BRITE Center will provide laboratories for scholars conducting research in several areas critical to biotechnology and biomanufacturing. Other topics of discussion included expanding teacher education at VGCC and partnering with NCCU to expand performing arts activities to VGCC’s service area.Based in Durham, North Carolina Central University, chartered in 1909, is a comprehensive university offering more than 100 bachelor’s degrees in various disciplines, 40 master’s degree programs and three professional degrees in law. Black Enterprise magazine has named NCCU as one of the Top 50 Colleges for African Americans in the nation in its September 2006 edition. Vance-Granville Community College, established in 1969, serves residents of Vance, Granville, Franklin and Warren counties at four campuses, offering more than 40 programs of study. In 2005, VGCC’s college transfer program was recognized as the best in North Carolina in helping students succeed when transferring to a four-year university.Pictured above: Vance-Granville Community College president Randy Parker (left) and North Carolina Central University provost Beverly Washington Jones (center) listen to Linda Love (right), director of NCCU’s Office of University and Community College Partnerships, as they prepare to sign articulation agreements between the two schools in the community college’s Biotechnology lab. (VGCC Photo)