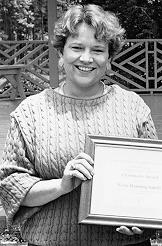 The Vance-Granville Community College family was greatly saddened by the death of Vesta Fortson Manning Dec. 9 at Duke Hospital in Durham.

Vesta, an instructor in Foreign Languages, Humanities and Social Studies at the college since September 1990, suffered injuries in an automobile accident on Nov. 20 and had been hospitalized since. She underwent surgery on Dec. 9 and died of complications brought on by her injuries.

Vesta Manning was known as a demanding teacher, who would only accept the very best from her students.

Stacy Wiggins Rideout of Norlina said she came to Vance-Granville in 1991 after coasting through high school. At VGGC, Stacy said she met Vesta Manning who was “so different from any instructor I’d had before. She challenged me, did not accept excuses, and made me feel more responsible and accountable,” Stacy said.

Like many of Manning’s students, Stacy Rideout excelled at Vance-Granville and went on to become an honors student at UNC-Wilmington. She then earned master’s degrees from Louisiana State University and is currently an instructor and reference assistant at the East Carolina University Health Sciences Library.

Numerous other VGCC students have credited Vesta Manning with giving them the push that started them on their way to success in academics and in life.

Dr. John J. Beck, chairman of the College Transfer program in which Manning taught, said, “She was an exceptional person who touched the lives of many students.”

Dr. Beck honored Vesta Manning with the Chairman’s Award for excellence in instruction in the College Transfer program in 1992.

President Robert A. Miller said: “Vesta will be remembered for her strong desires to help her students succeed. She will be greatly missed by her students and co-workers. Our sympathies are with them and with the members of her family and her friends.”

A native of Henderson, Vesta, 50, was the daughter of Richard deYarmen Manning of Mountain Top, Pa., and the late Vesta Wester Hughes.

She earned bachelor of science and master of arts degrees from Grand Valley State College in Grand Rapids, Mich., and began doctoral studies at the University of Arizona and the University of Florida. She taught at Kerr-Vance Academy and Eaton-Johnson Middle School prior to coming to VGCC.

Surviving, in addition to her father, are one sister, Jane Fraze of Tucson, Ariz.; two half-sisters, Jackie Lassiter of Hillsborough and Lessie O’Donnell of Nashville, Tenn.; and a nephew, Jeremy Lassiter of Chapel Hill.

A private service for the family was held Sunday, Dec. 12, at Ashland Plantation in Vance County.

Contributions in Vesta’s memory may be made to Vance-Granville Community College.