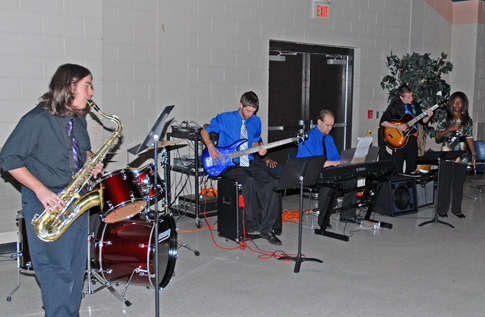 The Vance-Granville Community Band will perform its third annual Holiday Concert on Monday, Dec. 13. The program will begin at 7 p.m. in the Civic Center on the college’s main campus in Vance County. Admission is free and children are encouraged to attend.

Michael Stephenson, the Vance-Granville Community College music instructor and director of the band, said that the evening’s music will include several holiday-themed selections, including “A Christmas Festival” by Leroy Anderson, “Toboggan Ride” by Stan Applebaum, arrangements of “Greensleeves” and “Panis Angelicus” by Alfred Reed and several Christmas Medleys. In its premiere performance, the VGCC Silent Monk Chorus will give a rousing rendition of the “Hallelujah Chorus” by G.F. Handel.

The event will also mark the first public performance for this year’s “Vanguard Combo,” which consists of VGCC students who have received the college’s Music Performance Scholarships for 2010-2011: Joseph Colquitt of Creedmoor; Joseph Hedgepeth and Derek Jones, both of Henderson; and John Laible of Raleigh. Members of the Combo did perform as part of the Community Band at an October concert, but the holiday concert will be these students’ first official turn in the spotlight together. Joining the quartet will be Vance County Early College High School student Eriekca Crosby on vocals. The students are preparing several Christmas-themed favorites. For his part, Hedgepeth said that the beginning of his year as part of the Combo has been an enjoyable experience. “I had never met any of the other musicians before, but we have gotten along really well,” Hedgepeth said. “Also, Mr. Stephenson is a great guy, and he’s definitely pushed me and challenged me.” Hedgepeth played saxophone in his middle and high school bands, and applied for the scholarship because of his love of playing jazz. A College Transfer student, Hedgepeth would like to major in a music-related program at a four-year university and perhaps eventually work as an audio engineer in the industry.

Joseph Colquitt concurs with Hedgepeth that the talented group of musicians “have meshed really well together,” and he is looking forward to the Dec. 13 concert. “I’m excited about playing for the audience,” Colquitt said. “Music is fun anyway, but it’s a lot more fun when you’ve got a group of people to appreciate it.” Another jazz fan, Colquitt played guitar in a jazz ensemble with fellow home-school students during high school and in a club band based in Wake Forest. He jumped at the chance to get back into performing regularly when Stephenson informed him of the scholarship program. Colquitt was a student in the instructor’s Music Appreciation class.

For more information on the Community Band and other VGCC music programs, call Michael Stephenson at (252) 738-3346.

Above: From left, the “Vanguard Combo” of Joseph Hedgepeth (on saxophone) and Derek Jones (bass), both of Henderson, John Laible of Raleigh (keyboard) and Joseph Colquitt of Creedmoor (guitar), joined by vocalist Eriekca Crosby, will perform at the Vance-Granville Community Band’s holiday concert on Dec. 13. (VGCC photo)