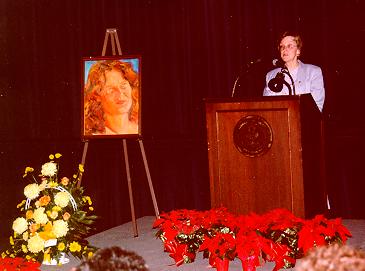 About 200 people got together Thursday (Dec. 16) in the Vance-Granville Community College Civic Center to hear and tell stories celebrating the memory and personality of Vesta Manning, an instructor who died Dec. 9 from injuries suffered weeks earlier in a car accident.

Faculty, administrators and former students alike paid tribute to Manning with speeches that shared a consistent theme – that Manning lived her life with unapologetic passion and threw her whole being into learning, teaching, and most intensely, the welfare of her students.

She was remembered aloud as a vital, dedicated, eccentric character who made those she touched experience a wide range of emotions.

A portrait of the late Spanish, anthropology, and history teacher, conceived by friend Deborah Ferruccio and painted by Matt Cooper, was unveiled and presented to the college, where it will hang in a faculty meeting room. Near the end of the ceremonies, the lights were turned off in the auditorium except for a spotlight, which beamed through the darkness on to the painting, illuminating the impressionistic creation so the audibly affected crowd could take it in.

“It’s uniquely awake … and free and flowing to capture Vesta,” said Ferruccio, the wife of a VGCC instructor and friend of several others.

College President Robert Miller illustrated how Manning was regarded by pointing out the number of students, friends and admirers who were at the service. There were current students who came straight from class, and Manning’s former students who traveled from out-of-state communities and four-year colleges to be at the ceremony.

Several said Manning regularly received mail from former students who have gone on to other places but kept in touch.

One of those students is Tostao Muonde of Henderson, Manning’s former Spanish and anthropology pupil who came to the U.S. from Namibia five years ago.

Muonde, currently enrolled at N.C. Central University, said from the lectern, “I have an emptiness now … I won’t have a chance to talk to her again. He’d just described how he had a chance to wake her when he visited Duke Hospital, but now regrets his decision to let her sleep.

He told how Manning, who insisted he call her “Vesta,” let him have time to rewriter papers, “time to do it right,” when he was struggling with the English language. He also told the assembly that Manning helped him better understand the new culture he now lives in.

College transfer director John Beck said of Manning, “She was a larger than life person – you simply could not ignore her.” Beck told of his respect for her constant appetite for knowledge, strong work ethic and deep commitment to teaching.

Beck also read from poet John Donne’s Meditation 17, a work rekindled for more recent generations by Ernest Hemingway’s “For Whom the Bell Tolls.”

Beck read: “… no man is an island … no man’s death diminishes me … never send for whom the bell tolls … it tolls for thee.”

The ceremony was brought to an emotional finale when Glynette Murphy sang an operatically clear, resonant rendition of “His Eye Is on the Sparrow.”

At the end of the song, before the last note of recorded music expired, she snuck in, “We love you, Vesta.”

Manning, who was 50 when she died, had lived in Mexico and had taught at both Kerr-Vance Academy and Eaton-Johnson Middle School She was instructor at VGCC for 12 years.

In the VGCC photo at above right, Martha Bergeron, a friend of Manning, describes the portrait that was unveiled at the ceremony.