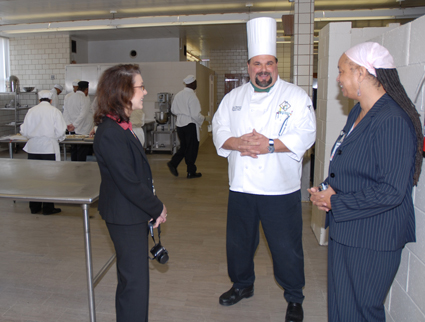 Students who are learning basic kitchen skills at Franklinton High School learned about how they might continue their education when they visited Vance-Granville Community College’s Culinary Technology program on Dec. 4.

VGCC’s two-year degree program, based at the Masonic Home for Children in Oxford, prepares students for entry-level professional positions in restaurants, hotels, catering operations, health-care facilities, schools and other institutions. Chef Ross Ragonese, head of the VGCC Culinary program, told the high school students about what the college offers. “There are always going to be culinary job opportunities around the world,” Ragonese said. “It’s a demanding but rewarding profession.” Ragonese said that an associate degree like the one VGCC offers opens up many doors. “It shows you’re serious because you’ve devoted two years of your life to studying the field,” he said.

Students also heard from VGCC Dean of Business & Applied Technologies Bobby Van Brunt, who praised them for thinking about education beyond high school, which he said they must have in order to be competitive. Ragonese then led students on a tour of the kitchen, where they observed VGCC students in the Baking I class preparing desserts and bread. They also sampled cinnamon buns the VGCC students had produced.

The group of students, who range from tenth through twelfth grade, are all enrolled in the “Foods II” class under the instruction of Maria Styers. The high-schoolers had the opportunity to ask questions of Ragonese and several VGCC students. FHS students wanted to know about practical concerns, such as the class schedule, grading and potential salaries they might earn with a VGCC degree, but also asked about the significance of the various hats worn by culinary professionals and about Chef Ragonese’s favorite type of food (Italian). Ragonese told the high school students that his program typically takes five semesters to complete, including general education courses that might be taken at different VGCC campuses, including the Franklin County Campus in Louisburg. Ragonese said that the VGCC program currently has 42 students, with approximately ten set to graduate next May. For more information about the Culinary program , call Chef Ross Ragonese at (919) 690-0312.

Above: Franklinton High School family and consumer sciences teacher Maria Styers (left) and Sharon Cannon, career development coordinator for Franklin County Schools (right), talk with Chef Ross Ragonese (center), head of VGCC’s Culinary Technology program, while leading a group of students on a visit to the Masonic Home for Children in Oxford, where the Culinary program is based. (VGCC photo)