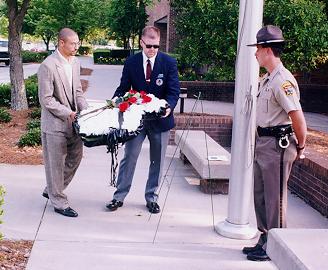 The services were sponsored by the Criminal Justice Club with assistance from the Basic Law Enforcement Training class.

Quon Bridges, an assistant district attorney with the Ninth Judicial District, (shown in the photo at right) was guest speaker. Club members Kirk Purkiser and Michael Richardson laid a wreath at the flagpole in front of Building 1 in honor of fallen officers and an honor guard from the BLET class performed taps and fired a gun salute.

A highlight of the program was the reading by Tyler Poteat, vice president of the Criminal Justice Club, of the names of five North Carolina law officers, including one from Warren County, who were killed in the line of duty during the past year.

In April and May, the Criminal Justice Club proved itself once again to be one of the busiest student organizations on the VGCC campus.

Beginning on the very first day of April, club members distributed Easter candy to all the children at both the Central Children’s Home and the Masonic Home for Children in Oxford, and to those in the day care centers on Main Campus and Franklin County Campus.

The Criminal Justice Club teamed up with the Vocational Club to pick up trash and bag it along Poplar Creek Road and the I-85 interchanges on April 26 as part of the Great American Clean Up.

Members of both clubs remind everyone that litter is a big problem on roads leading to the campus and on the campus itself, and they challenge students and staff to help keep the road and campus clean.

“Dispose of litter properly,” the announcement said. “We have a beautiful campus; let’s keep it that way.”

Two days after the clean-up, Criminal Justice Club sponsored a fish fry for members and guests, where everyone ate well and had a great time.

In the top photograph, Michael Richardson, left, and Kirk Purkiser, members of the VGCC Criminal Justice Club, lay a wreath at the college flagpole in memory of five North Carolina law enforcement officers who died in the line of duty during the past year. At right is Granville Sheriff’s Deputy Benjamin Laws, who lowered the flag to half-mast during the Fourth Annual Law Enforcement Officers Memorial Day ceremonies.