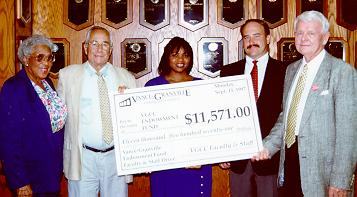 Chairman John T. Church presided over the session in the board room on Main Campus.

The members approved a motion to accept the Financial Statement Audit Report for the year ending June 30, 1996.

John Foster, budget chairman, noted that the State Auditor’s Office disclosed “no instances of noncompliance and no material weaknesses” in the report. “This says a lot for the college, its administration and business office staff,” said Foster.

The trustees likewise approved action to accept the unaudited Statement of Financial Condition, as presented for the year ended June 30,1997. The members also OK’d the 1997-98 Budget Resolution as presented. The total budget, which includes the operation budget, capital outlay and construction budgets, totals $19,214,148.

David Brooks, Building Committee chairman, reported that ground for the new Franklin County satellite campus was broken Aug. 25, and work on that project is proceeding ahead of schedule. Vance-Granville plans to enroll its first students there next fall.

Brooks added that final plans are being drafted for additions and renovations to South Campus. As soon as state approval is received, work will be begin there, he said.

Dr. Ben F. Currin, president, announced that the annual VGCC Faculty and Staff Endowment Fund Drive, which ended Sept. 8, resulted in $11,571 being collected for college’s scholarship program. This amount, an all-time high in contributions by employees, brings to $88,971 the grand total given since the initial campaign in 1982.

Shown in the photograph at right are, from left, Henrietta H. Clark, board secretary; John T. Church, board chairman; scholarship drive co-chairpersons Kathryn Jones and Curtis Tyndall; and John K. Nelms, vice chairman of the board. Another co-chair, Angela Ballentine, was unavailable for the photo.

Sharing enrollment data with the board, Dr. Currin announced 2,636 curriculum students are attending fall semester classes, compared to the 2,606 who enrolled for the same period last year.

Occupational Extension classes accounted for the largest increase, however, with registration in 1995-96 reaching 9,565 students. Last year, that figure grew to 11,309.

“We are pressed to keep up with the demand for many of our extension classes, especially those that train nursing assistants, EMT and fire service personnel,” said Dr. Currin.