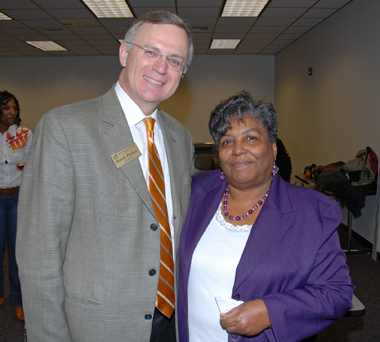 One of the most familiar faces and voices at Vance-Granville Community College will not return when the spring 2011 semester begins in January. Irma B. Brodie of Henderson is retiring effective Dec. 31, 2010, after almost 30 years as the receptionist and switchboard operator on the college’s main campus. Members of Brodie’s family joined her at a retirement celebration organized by her colleagues on Dec. 8.

Brodie recalled that she was the very first employee hired by VGCC’s then-president, Dr. Ben Currin, in March 1981. She remained at her position under two more presidents, Robert Miller and the current college leader, Dr. Randy Parker. A part-time employee at first, Brodie became full-time in 1988.

“For almost 30 years, you’ve been the voice of Vance-Granville Community College,” President Parker told her at the Dec. 8 reception. “You’ve been the first point of contact, greeting so many visitors and callers who were trying to find someone or looking for more information about the college. On behalf of all our students, faculty and staff, I want to thank you for all that you have done.” VGCC Vice President of Finance and Operations Matt Williams also praised Brodie for her service in a job that he said required a great deal of patience and dedication.