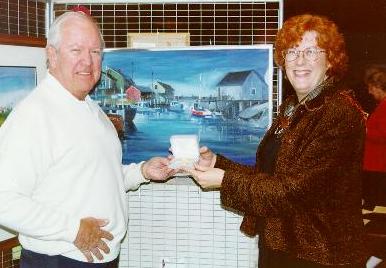 The Grumbacher award goes to the creator of the best artwork in the show using at least 50 percent of Grumbacher products. In addition to the gold medal, Moseley won a $200 merchandise certificate from Grumbacher and $500 cash for taking first place.

A former architect who lives on Lake Gaston, Moseley began painting when he retired in 1991 and began taking art classes under Lelia Brigham at VGCC. He has won numerous awards in shows throughout the area.

Second place was awarded to Hot Pursuit, an opaque watercolor of hounds chasing a rabbit, by Ronald Ragland of Raleigh. Another watercolor, A Day of Rest, by Beth Smith of Raleigh, took third place among the 102 entries that were juried into the show.

Honorable mentions also went to Blue Ridge Ballet, an oil painting by Dianne T. Rodwell of Raleigh, formerly of Warren County, to Rebekah, a pastel by Ann P. Wilson of Henderson, to End of the Day, a pencil drawing by Linwood Waters of Oxford, and to What’s Mom Doin’?, a color photograph by Sol Levine of Raleigh.

More than $1,500 in prizes and purchase awards were given to winners of the show, judged by Carolyn Tucker Lombard of St. Petersburg, Fla. Lelia Brigham, president of the Kerr Lake Arts Society and coordinator of the show, said 55 artists from North Carolina, South Carolina and Virginia entered the show.

Entries will remain on display in the lobby of the VGCC Civic Center from 8 a.m. to 9 p.m., Monday-Thursday, and 8 a.m. to 4 p.m. on Fridays until Oct. 31. The public is invited to stop by and view the artwork. VGCC is located just off Exit 209 on I-85 between Henderson and Oxford.