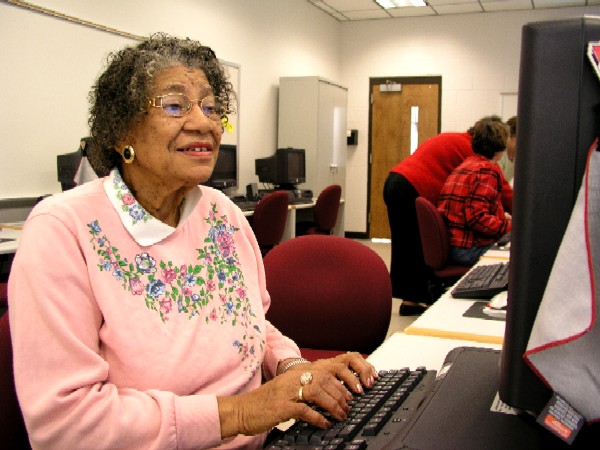 Johnnie Young Mims Sanders pursued her love of travel after a 45-year teaching career in Vance County schools. Now, at age 91, she says she’s too old and too infirm to take off on cross-country jaunts so she is turning to the computer to open up new worlds for her.

Sanders has enrolled in the Beginners Guide to Computers and the Internet class at Vance-Granville Community College to get her started on new journeys. “I bought a computer about a year ago, and I had some individual instruction, but I still don’t know anything,” she said.

So she took advantage of Vance-Granville’s introduction to computers and joined six others in the Wednesday classes held six hours a day for four weeks. Students are introduced to the components and functions of computers, how to create files and file management, how to conduct Internet searches and how to send e-mails.

She said she is just beginning. Eventually, she hopes to be able to send and receive e-mail and to search the Internet for the world of information it offers. “I cannot comprehend the possibilities of an instrument like this,” said Sanders.

A writer of poetry for many years, Sanders hopes to be able to publish her works with the help of the computer. She writes her poems for special occasions, like birthdays, anniversaries, etc., and she has already chosen a title for her book: “The Poem and the Occasion.”

Sanders has lived in the same location on Arch Street in Henderson all her 91 years. The house she was born in burned down, but she rebuilt on the same spot and feels she is very fortunate to have always spent her life in one place.

A graduate of the Henderson Institute, she earned bachelor’s and master’s degrees from North Carolina Central University. She taught elementary school until moving to the Vance Schools central office to head the Professional Enrichment Library. Later, she was media specialist at E.M. Rollins School.

Following retirement in 1978, Sanders began to travel. “I had never taken a summer off. I was always going to school at Central, and I was director of music at Shiloh Baptist Church,” she said. A member of Shiloh Baptist for 84 years, Sanders is its oldest member and the Mother of the Church.

She traveled throughout most of the United States and made several trips to the Caribbean before health problems halted those adventures.

This isn’t Johnnie Sanders’ first exposure to Vance-Granville Community College. She helped conduct the interest survey that led to the founding of Vance Technical Institute, the forerunner of the college. She also recalls taking typing at the former Vance Hotel soon after the Vance Technical Institute began in Henderson 35 years ago, before it had campus buildings. She has also taken sewing classes in VGCC’s Continuing Education program.

But this computer instruction is a whole new world for the adventurous Johnnie Sanders, and she says, “I’m going to stick with it until I get it.”